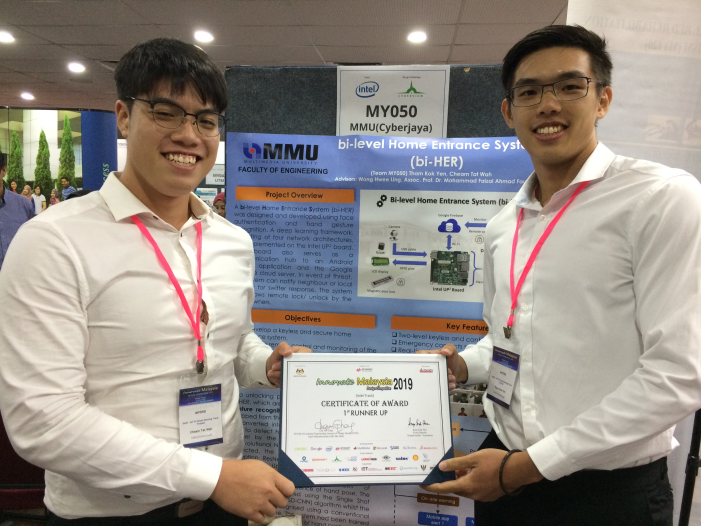 Exposing The Students To The Actual Environment of IT support

The judges were impressed with their project, “bi-level Home Entrance System (bi-HER)” which was inspired by the need to keep a neighbourhood safe through community connectivity and engagement. The project was designed and developed with an emphasis on face authentication and hand gesture recognition for keyless and contactless identification. A deep learning framework, consisting of four network architectures, was implemented on an Intel UP2 board. The board also serves as a communication hub connecting an Android mobile application and the Google Firebase cloud server. In the event of a threat, the system can notify a neighbour or local security for immediate response.

367 teams from 28 universities nationwide participated in this competition. Selected teams were given the necessary technical resources and support by the industry partners to develop their ideas into actual prototypes. After several preliminary rounds, about 60 teams were shortlisted as the finalists this year. The grand finale was held in Tunku Abdul Rahman University College (TARUC), Penang and the event was graced by Yang Berhormat Dr. Ong Kian Ming, Deputy Minister of the Ministry of International Trade and Industry (MITI).

This competition also serves as a stepping stone for the grand finalists to kick-start their careers, as they were able to showcase their talents to potential employers during the event. Among the industry partners who attended the event were Intel, Google, Microsoft, Silterra, Shell, Keysight Technologies, Continental, SAS and many more. Representatives from the industry partners were among the judges in this competition.